The appeal of Karen Kilgariff and Georgia Hardstark’s podcast “My Favorite Murder” mystifies my husband. The true crime topic is not his cup of tea, and the women’s banter “just sounds like a couple of your friends rambling on after a few too many glasses of wine,” he said. Exactly. But My Favorite Murder (MFM) is a lot more than that. 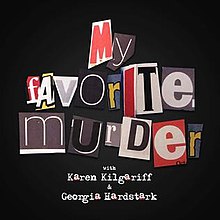 Georgia Hardstark, a So-Cal suburban Jewish woman and Karen Kilgariff, raised Roman Catholic in relatively rural Petaluma in Northern California often joke about their respective religious backgrounds. Their spiritual formation, however, is evident in the podcast if you look for it.

The way the podcast has developed displays several theological themes found in the Jewish and Christian traditions. These themes, or movements, are part of the narrative arc fundamental to these traditions. While other forms of news or entertainment might also include some of these components, MFM has all five to an extent that renders the whole greater than the sum of the parts.

I think the unique combination of these dynamics are part of the appeal for devotees even if subconscious. It took me a while to understand why I was suddenly binge-listening to over 100 past episodes. As I reflected theologically* on the show and what it was really doing, I noticed several things.

Over the next several weeks I’ll be posting my thoughts on how I see theological themes in the MFM podcast. They are colored by my faith lens. My hunch is that Karen and Georgia are influenced by their religious upbringings in a positive way even if they have rejected certain aspects of religion. They may challenge and disagree with me. They have the last word on what has influenced them.

Whether they agree or not, whether they intended it or not, the podcast resonates with many of my deeply held religious beliefs, and that is why I continue to enjoy it. I hope these reflections might be enlightening to them, their listeners, and also to anyone wringing their hands over why “the church is no longer relevant to young people.” (I don’t actually believe that, by the way, but I digress.)

So let’s get started with the beginning…   Creation: Gathering

*My reflection framework is based on a method developed in the Education for Ministry program of the Episcopal Church. The program helps people connect theological ideas with their every-day lives.

This site uses Akismet to reduce spam. Learn how your comment data is processed.