In this series of posts I’ve been calling for more involvement with the dead for theological reasons, and you might be thinking that while these ideas are somewhat logical, you personally could never stomach dealing with the bodies of the dead. The good news is that dealing with the dead is most appropriately handled in community, and, if such an approach is taken, individuals can enter into the holy space of the dead as each is able and by degrees. Fear and trembling are appropriate responses in holy spaces. Christians, however, do not journey alone. All we have covered thus far is communal: Baptism and Communion cannot be done outside of community. The journey in faith as something taken in steps with companions on the way is now being emphasized in many Christian denominations. We turn our attention to the body of the faithful to see the importance of journeying together all the way from the font (baptism) to the grave.

The home funeral movement is to some extent a natural extension of the hospice movement, in which dying in a setting surrounded by care and support, rather than denying the process of death until the last moment, has been claimed. The home funeral movement is also teaching our society that whether a death was tragic or natural, dealing with the body is a privilege that we need not give up. Much of this movement consists of people sharing their stories: people who refused to give over the care of loved ones to strangers, but were compelled to care for their loved ones themselves. Even those who lost loved ones in unexpected ways were able to claim the bodies of their dead, care for them at home, and take all the time they needed to say goodbye. Taking the time they needed allowed them to come to terms with the reality of deaths that were jarring and unexpected: those lost in car accidents, and neo-natal deaths, as well as those that were the end of a long struggle with illness. What all of these stories have in common, however, is that of a community gathered.

The process of dealing with the dead at home affords those who knew the deceased a variety of ways to care for the deceased and their family, and this invites more participation with one’s wider community than the modern ways of dealing with the dead. Calling the undertaker to whisk the body away immediately or simply leaving the body at the hospital and finding it later neatly dressed at the funeral home or contained as ashes in an urn may be convenient, but this comes at an unrecognized cost that is much more than financial. 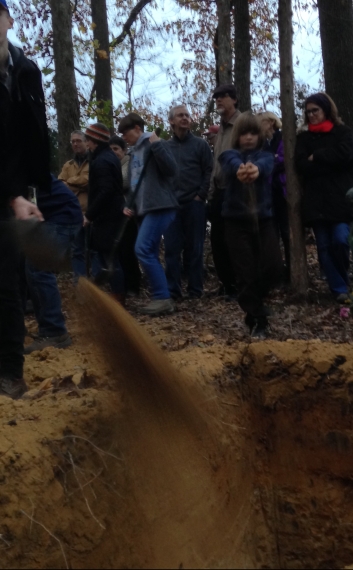 When my friend died I noted the usual ways that people care for each other when a death occurs: casseroles and plates of cookies, cleaning house, transportation of children… But there were also ways that the community served in place of a funeral home: keeping the body cool and clean, anointing him with fragrant ointment, putting our friend in his coffin, transportating the body to and from the church, and then to the grave, and even into the grave, and finally filling the grave by hand… Nowell’s son decorated the top of the coffin with a simple cross and sprig of greenery and berries from the yard; his grandson dropped fistfuls of dirt into the grave. Each was able to help in his or her own way, directly with the body or not. One friend simply stayed at the house so that our friend’s body would not be alone while the family left to choose a coffin and a burial site. While they were out, other friends came and played music to usher the spirit on its way.

This process of impromptu gathering was most intense for the first 48 hours as members of the church community, his professional community, his neighborhood, and other subculture communities in which he and his wife had journeyed through parenthood and socially came as they were able. With Nowell’s body at home, such an extended and overlapping process was accommodated in a way that set visitation hours at a funeral home would not have. Connections between Christians in different denominations were made. Jewish and non-religious people as well, gathered and blessed each other in this process of serving, grieving, and remembering. It was indeed a foretaste of the heavenly realm, where all will be gathered up in the love of God and unity of the Holy Spirit. There was a church funeral and reception at a specific time; there was an interment as well, which, as it happened, turned out to be the space for sharing stories. The three days, however, opened up more time for impromptu jam sessions (my friend was a musician), quiet extended conversations, contemplation about many things… His friends celebrated him with music, stories and food, and no one had to “miss it” who wanted to participate. The community of all who loved him began to shape the life of his memory as it simultaneously dealt with the practical aspects of moving and burying a body.

The time of death and the necessary work of dealing with the corpse offers a most fitting time for the community to gather, becoming a sign and symbol of the body of Christ, and minister, demonstrating what it means to be the church. This dynamic and important action should not be contained to the church building and graveyard, but should infiltrate the common places where we live and die, (and even commute!). By taking all the time and space we need to care for our dead, Christians excercise the ideal of ministry by all members of the body within the province of everyday life. All gathering, all blessing and being blessed – this is what it means to be the Church, the body of Christ in and for the world.

This site uses Akismet to reduce spam. Learn how your comment data is processed.